In the midst of dolphins and whales – Scuba Diving in Tenerife

In the midst of dolphins and whales – Scuba Diving in Tenerife

Would you like to see an impressive underwater world?- Then come to dive in Tenerife

Explore the amazing and multivarious flora and fauna. Scuca Diving in Tenerife is an exciting adventure. Equal if you are a beginner or advanced  – divers of every skill level are welcome to make their experiences in the crystal clear blue water.

Because of the mild climate, Tenerife is the perfect and favourable place for diving. Throughout the whole year the temperatures are mild. In the winter time the water temperature doesn`t  fall under 18 degrees. In the summer season the temperature reaches 24 degrees. So, you can enjoy a variety of sea life almost 365 days a year.

Tenerife is a paradise for divers. More than 22 different diving places are located at the coast of Tenerife. Here you will find a colorful flora and a dramatic underwater world. Enjoy the impressive and unique fauna! The abundance of fish is great because of the Atlantic and Subtropical marine fauna. It includes barracudas, manta rays, tunas, stingrays, seahorses, moray eels, turtles, whales and dolphins. In the winter months, between November and April, anglesharks also can be spotted.

You would like to experience the most beautiful underwater landscape? Then explore the Tenerife landscape. It is affected by caves, drop-offs, overhangs and tunnels. Amazing rock formations and steep faces of volcanic origin turn it to an unforgettable adventure. The different cliffs are between 6 and 50 meters deep.

The 10 most famous diving sites

The most popular diving locations are located in the south-east and the south- west of the isle.

For people who like to make an extraordinary experience there is the chance of wreck diving in the Condesito wreck near Santa Cruz. Also there is a possibility to dive during the night: in the north of the island, next to Santa Cruz. 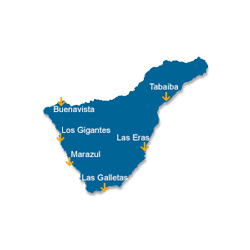 FIND US IN THE SOUTH

Beaches Fun for Everybody Sightseeing Sports